Gum resin is a natural raw material that has multiple applications in the manufacturing of chemicals products. Historically, the production of gum resin has been a relevant economic resource in the coniferous forests from Mediterranean Europe, mainly in forests of maritime pine (Pinus pinaster) and in to a lesser extent, Aleppo pine (Pinus halepensis), stone pine (Pinus pinea) and black pine (Pinus nigra). The European productive peak was reached in 1965, with 250,000 tons produced. Since then, the sector declined gradually in the continent due to lack of competitiveness against foreign gum resins and substitutive oil based products. In the decade of the 1990s, European production almost stopped. In the first decade of the 21th century, a change in the global market situation allowed a revival of the harvest activity in the most traditional areas of the Iberian Peninsula. This timid reactivation has been possible because of a marginal activity sustained by some first transformation local factories, the know-how hoarded by ancient workers, the interest of some institutional owners and the existence of forests ready for the exploitation thanks to their sustained management. Simultaneously, several institutions have launched their research programs in the gum resin area, regarding the improvement of the whole value chain from forest to market.

Nowadays, the industrial demand for resinous products in Europe is estimated at 300,000 tons per year. The reactivation of the Mediterranean forest production could supply part of this demand. Potentially, the revival of natural resin production in Spain could be replicated in other Mediterranean countries rich in suitable pine forests, contributing to a greener economy, improved rural livelihoods and creating industrial jobs. There are, however, significant hurdles related to profitability, uncertainty on the compatibility with other forest uses, the potential impacts of climate change and the lack or loss of traditional know-how. In this context, the focus of the iNet of resins will be to explore existing research and innovation knowledge and the best practices across European gum resin value chain in order to deal with the main challenges that the sector is facing. 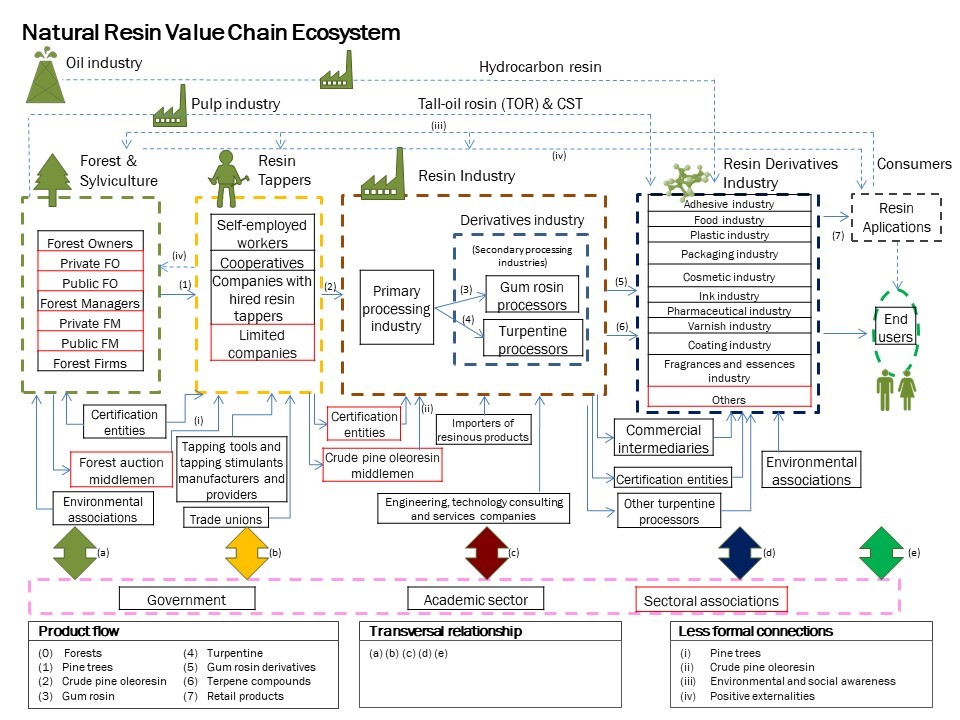 During the celebration of the Scoping Seminars, some work sessions were held to identify the priority themes to focus Resins iNet actions:

A plenary session proposed a number of priority themes to focus innovation efforts on. The proposals were grouped by theme, establishing four themes covering all the proposals.

The work of reflection concluded with a vote in which the topics were prioritized in the following order: