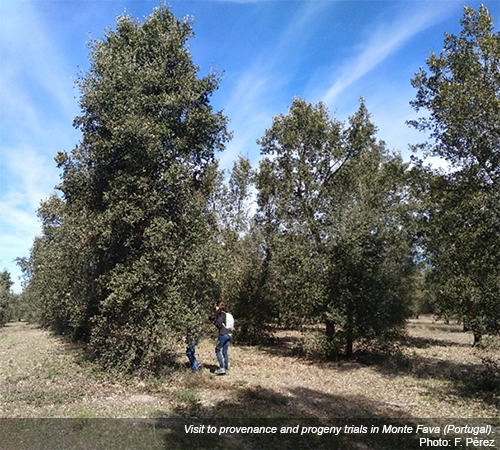 Genetic variations in cork oak have a significant effect on the tree’s resilience to changes in climate, amongst other factors. Knowledge about these variations, and how they spread across the Mediterranean, is vital for appropriate selection of trees for regeneration and genetic conservation programmes.

The Cork iNet Interregional Workshop held at the Instituto Superior de Agronomia (Lisbon, Portugal) on 25-26 February focused on the international network of provenance and progeny trials of cork oak. The event, carried out with the participation of several countries, represents a crucial step in the coordination, cooperation and establishment of synergies among countries and will contribute to optimise the data and results from the trials, which will help to increase the knowledge of the species and the conservation of its genetic resources.

Cork oak is widely distributed in the Western Mediterranean region, spanning a range of different environmental conditions, and frequently dominating open woodlands of high conservation and socio-economic value. Cork oak is well adapted to the seasonal drought of Mediterranean climate, following several decades of warming- up and frequent drought years. The European Academies' Science Advisory Council (2017) reports that the Mediterranean forest is already being affected by climate change (IPCC, 2014) and that the montado/dehesa ecosystem in the southern part of the Iberian Peninsula is particularly vulnerable to high-end climate scenarios that go above the Paris Agreement 2° C increase in temperature . Since longer, more frequent, and more intense drought periods are expected, stress caused by the expansion of arid and semi-arid climate will affect the species distribution. Consequently, not only established stands may be prone to tree mortality, but also the current reforestation effort may be jeopardised by low survival rates attributed to the use of unsuitable genetic material.

It is expected that, through genetic adaptation and/or phenotypic plasticity, cork oak populations may have developed significant differences in fitness and the traits related to it. In this context, provenance and progeny trials are the best resource of material to assess the variability between and within populations from seed sources sampled in a wide range of locations (stands) covering the geographical distribution of the species. This will enable the researchers to assess the levels and patterns of phenotypic plasticity and genetic variation for growth and traits determining adaptation to local environment, hence providing crucial information to select appropriate seed sources for planting, as well as to develop sustainable breeding and gene conservation programs.

In 1998, 17 multisite provenance trials and progeny trials were established based on common genetic entries that cover the entire area of cork oak. These trials were organised within the initiative frame of the EU-funded project FAIR 202 “Evaluation of Genetic Resources of Cork Oak for Appropriate Use in Breeding and Gene Conservation Strategies”. The project was coordinated by Portugal with partners from Spain, France, Italy, Sweden and Germany and benefited from collaboration with EUFORGEN and FAO Silva Mediterranea in facilitating meetings and scientific discussions. The trials were installed in Spain, France, Italy, Tunisia, Morocco and Portugal.

Each country has been responsible for the management, measurement and data collection from their trials since they were established. The studies conducted on each common garden resulted in a high number of publications. Considering these trials are now 21 years old, it seems the right time to join efforts to re-evaluate common objectives such as trial maintenance, new measurement collection and data analysis.

The two-day workshop was organised in the framework of the EU-funded INCREDIBLE project (Innovation Network of Cork, Resins and Edibles). The workshop opened with presentations about the trials and the respective first results, with subsequent discussion on the follow-up of the trials. A full day field trip visited the provenance/progeny trial at Monte Fava. Participants came from Portugal, Spain, Italy and Tunisia, securing representation from all countries (except France) where provenance and progeny tests of cork oak have been installed with success under FAIR I CT 95 0202.

During the discussion sessions proposals included standardising management practices in field trials as well as harmonising measurements by sharing or using common protocols.  Participants agreed that it is advantageous to share and communicate silviculture practices to be implemented in the different field trials, as far as possible, considering that each field trial has particular environmental conditions that affect their implementation. Research collaboration ideas and preparation of a possible joint project were also discussed.

Finally, a coordinated measurement of field trials was scheduled for autumn 2020 (November). A meeting in February 2021 was proposed to discuss the results obtained, to organise and implement a database and to plan a collaborative scientific manuscript.

essay service
someone to write my essay
buy essays online